A High-Level Failure for the United Nations on Key Populations 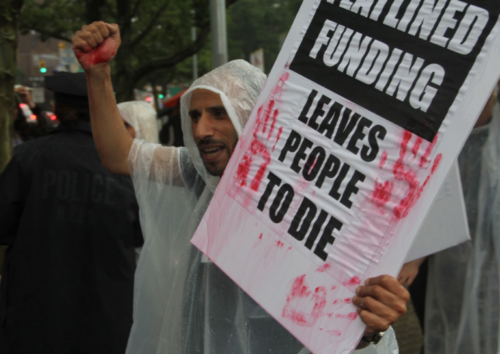 New York, NY – The Global Network of Sex Work Projects (NSWP), The Global Network of Trans Women and HIV (IRGT), Global Action for Trans Equality (GATE), and MSMGF (The Global Forum on MSM & HIV) together with the Global Platform to Fast-Track the HIV and Human Rights Responses Among Gay and Bisexual Men and Other Men Who Have Sex with Men (The Platform) are deeply disappointed by the adoption of a flawed Political Declaration today at the United Nations High-Level Meeting on Ending AIDS (HLM). The Political Declaration inexcusably fails to meaningfully address the HIV epidemic among key populations, including gay and bisexual men and other men who have sex with men, sex workers, people who use drugs, and transgender people. The Final Declaration damagingly excludes and misrepresents key populations. It also lacks an explicit commitment to support and finance key population-led and tailored prevention, care, and treatment services. Likewise, it is woefully misses the mark in highlighting legal and policy frameworks that stigmatize and criminalize our communities worldwide. While the document opens with a sweeping “commitment to end the AIDS epidemic by 2030,” our networks and many of its global civil society allies contend that today’s Political Declaration is a significant set-back in our work to end AIDS, particularly among key populations.

Immediately following adoption, numerous delegations including those from Egypt, Iran, Saudi Arabia, Sudan, Indonesia, and the Holy See made statements condemning the explicit mention of key populations in the declaration, and expressed dismay that the 2016 Declaration no longer called for abstinence and fidelity to be included in HIV prevention programs. Several member states, including Australia, Canada, Honduras, and the United States, countered by expressing their disappointment that the final Declaration did not go further in its commitment to key populations. Other friendly Member States remained politely silent or understated in their interventions.

Prior to HLM, conservative Members States rejected accreditation of several civil society organizations to attend the meeting for several organizations led by key populations, including gay men and other men who have sex with men, transgender people and people who use drugs. This turned out to foreshadow rapid endorsement of a flawed Political Declaration, with no opportunity to openly deliberate. The High-level Meeting has also revealed the willingness by many global HIV actors to treat key populations as dispensable.

Taking Matters into Our Own Hands GATE, IRGT, MSMGF, NSWP, the Platform and its allies will keep pushing. We have joined with over 80 civil society organizations in proclaiming profound dissatisfaction with the Political Declaration. We have crafted and published our own Global Civil Society Organization (CS0) Declaration. The Global CSO Declaration rejects language that victimizes or blames key populations and fuels discrimination. It also plainly rejects HIV responses that are driven by ideology, rather than informed by evidence and international commitments to human rights.

GATE, IRGT, MSMGF, NSWP, the Platform will continue to diligently hold governments worldwide accountable for effectively addressing HIV in meaningful partnership with key populations. As a member of the official U.S. Delegation to the UN HLM, MSMGF Executive Director, Dr. George Ayala continues to work closely with Ambassador Deborah Birx and his delegation to take stronger and more public leadership in support of our concerns. This includes finding ways to eliminate legal and policy frameworks that stigmatize and criminalize key populations.

How allies can help now:

For allies in New York City, keep raising your voices with us at rallies, protests, and side events outside the UN this week

Short hyperlink to this blog: bit.ly/UNfailures

MSMGF will continue to provide updates from the HLM. For additional guidance or to provide feedback, please contact Nadia Rafif, Director of Policy, at nrafif@msmgf.org.

Yours in global solidarity,
GATE, IRGT, MSMGF, NSWP and the Platform