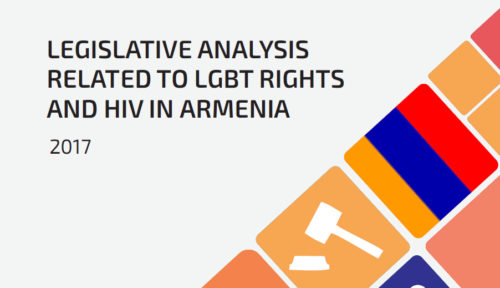 This is stipulated in «Legislative analysis related to LGBT rights and HIV in Armenia».

According to the analysis, criminal responsibility for same-sex relations was cancelled in Armenia in 2002; restrictions for people living with HIV to enter the country were abolished in 2011. Besides, amendments to the Law “On the freedom of assembly” to restrict the powers of law enforcers for uncontrolled interventions into implementation of the freedom of expression and peaceful assembly have already been developed and are awaiting the approval.

There are concerns related to high vulnerability of trans people and lack of the procedures of both gender reassignment and legal gender recognition, which not only increases the stigmatization of trans people in the society but also leads to the numerous cases of their discrimination. It should be noted that there is a growth in the level of homophobic and transphobic violence and failure of the respective agencies to properly qualify and effectively investigate such cases. LGBT are not only subject to permanent insults and attacks, most of them have to conceal their status to ensure their personal safety.

In Armenia, as opposed to the heterosexual couples, whose status is regulated in the Constitution and in the Law “On family”, the needs of same-sex couples in Armenia are not satisfied, whereas, as pointed out by the practice of the European Court, such needs are fundamental to regulate and ensure stable relations in a couple, such as mutual financial support, maintenance obligations and the right of inheritance. Besides, with no registration of same-sex partnerships and/or marriages, members of such families have restricted access or no access to each other in cases of arrest, confinement; they have no possibility to make decisions on emergency health care, etc. Restriction of such rights also makes it impossible for a same-sex couple to adopt a child as a family. The law guarantees all the above-mentioned rights of heterosexual couples, even if their marriage is not registered, but does not provide any of such rights to same-sex couples, which is discriminating and may be interpreted as an interference with their family life.

To improve Armenia’s legislation and measures to eliminate discrimination against PLWH, gay men, other MSM and trans people, ECOM recommends:

The goal of this review is to identify the legal barriers for people living with HIV, gay men, other men who have sex with men and trans people in exercising their rights in different areas. To conduct such review, ECOM developed a methodology and a survey questionnaire, which we filled in with the help of our local partners. When analyzing legal practices, consideration was given both to judicial practices and to the information provided by activists, received from the organizations documenting cases of human rights violations and protection of such rights, news in mass media, and reports of non-governmental organizations submitted to the international agencies.

To present information on the legislation currently in force, in this review we used extracts from the regulatory documents, which are, unfortunately, not always correct and fail to comply with the international politically correct terminology standards. In this case, the original wording is presented to ensure objective demonstration of the existing regulatory framework and the language used in the matters analyzed. All quotations from the regulatory documents are given in quotation marks.