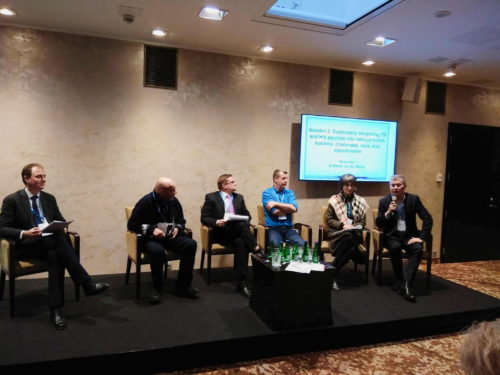 Today and tomorrow, 12 and 13 December, an international meeting is being held in Tallinn under the auspices of the Estonian Presidency of the Council of the European Union, concentrating on funding the programmes and services aimed at stopping the spread of HIV and tuberculosis (TB).

The event brings together representatives of the health and financial ministries of Europe, the Balkan and Eastern Partnership countries, representatives of the European Commission, the WHO and other international organisations, as well as civil society, and other institutions involved in funding programmes and offering services to counter HIV and TB. The meeting will be opened by Estonian Minister for Health and Labour Jevgeni Ossinovski. ECOM is represented by Executive Director Vitaly Djuma.

“The spread of HIV and TB continues to be a problem in Europe; it is a great concern in Eastern European countries where the situation is the most critical and the availability of treatment is among the worst in the world. In these countries, the vital services to fight these diseases have often been built with foreign aid. We now have to find ways to move these services to permanent state funding and smoothly integrate them to national healthcare systems,” said Estonian Minister for Health and Labour Jevgeni Ossinovski.

“In this respect, Estonia is a role model for other Eastern European countries. When it comes to HIV services, we switched from the funding of foreign donors to state funding nearly ten years ago. We have reached a political agreement that this is a priority issue and therefore, we have steadily increased state funding. In the recently completed HIV action plan, we have set the ambitious goal of significantly reducing the number of new HIV infections in the coming years.”

According to Annika Veimer, the director of the National Institute for Health Development, the main challenge lies in finding the most efficient way to prevent and treat HIV and TB without losing focus. “Despite efforts, the number of new HIV infections has not significantly decreased in recent years and in the European context it is still very high. The number of new TB cases is falling but there are still twice as many cases as in the Nordic countries. Also, Estonia and the rest of the world are struggling with the spread of treatment-resistant TB, i.e. multi-drug-resistant tuberculosis,” Veimer said. “This field is extremely complex and various problems are intertwined – for example, a tenth of TB sufferers are also HIV positive and over half of them have problems coping in society. These are factors that we must take into account.”

At the conference held in Tallinn, participants search for ways to smoothly transition from funding through foreign aid programmes to sustainable state funding. Experts from Estonia and beyond will outline the best practices, challenges, opportunities and risks related to integrating HIV and TB programmes into a national healthcare system. The discussions will also include the role and responsibility of various institutions and organisations in stopping the HIV and TB epidemics.

In Eastern Europe the fight against these diseases has largely been funded through international organisations (such as the Global Fund to Fight AIDS, Tuberculosis and Malaria).However, this kind of funding is not sustainable in the long term. The new challenge is a smooth transition to sustainable funding so that the work of HIV and TB programmes can continue after foreign aid ceases.

In Estonia, too, local HIV services were built with money from the Global Fund, including harm reduction services for drug addicts, which has been vital for reducing new HIV infections.

In addition to Estonian experts and researchers, specialists from Lithuania, the Netherlands, the United Kingdom, Romania, Moldova, Serbia, Bulgaria, Montenegro, Ukraine, and Russia will also speak.

The ‘Addressing HIV and TB Challenges: from Donor Support to Sustainable Health Systems’ meeting of senior officials is organised by the Estonian Ministry of Social Affairs in cooperation with the National Institute for Health Development under the auspices of the Estonian Presidency of the Council of the EU.