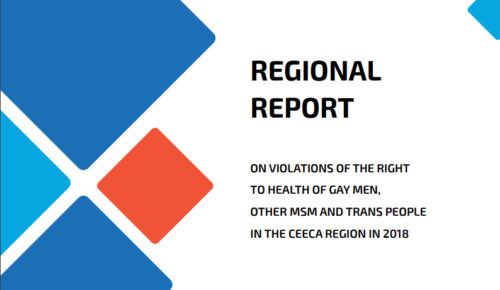 The Eurasian Coalition on Male Health (ECOM) publishes the “Regional report on violations of the right to health of gay men, other MSM, and trans people in the CEECA region in 2018”.

The second CEECA regional report on violations of the right to health of gay men, other MSM and trans people is a summary report based on five country reports prepared by community organizations in Armenia, Belarus, Georgia, Kyrgyzstan, and North Macedonia. The majority of the country reports are based on empirical evidence (cases), gathered through direct observation or personal experience.

The report describes the social, institutional, and legal barriers, which limit gay men, other MSM, and trans people from fully realizing their right to health in the region of Central and Eastern Europe and Central Asia (CEECA). The report also offers a review of gaps in legislation on the cross-cutting themes of discrimination based on sexual orientation and gender identity (SOGI) and HIV.

“This publication is an invaluable resource for decision-makers in the countries of the CEECA region, which is currently one of the few regions in the world still faced with rising numbers of people with HIV infection. Data strongly indicate that most of the countries are facing a concentrated epidemic among gay men and other men who have sex with men. Improving HIV services for key populations cannot be done without first assessing the social and legal barriers. Clinical interventions alone are not enough, they must be deployed alongside essential strategies for an enabling environment, including measures such as revising legislation and policies, addressing stigma and discrimination, preventing violence and empowering communities. For countries seeking to prevent and treat HIV, this report will surely be essential reading alongside the WHO consolidated guidelines on HIV prevention, diagnosis and care for key populations (2016), which emphasizes that an effective response must be based on a comprehensive package of interventions,” – said, says Dr. Antons Mozalevskis, focal point for HIV Key Populations at the WHO Regional Office for Europe.

The discrimination cases described in the report vary considerably, as they relate to various types of rights violations (including but not limited to the right to health), and concern representatives of different communities (gay men, MSM, trans people). However, the basis for discrimination in all the cases was the sexual orientation or gender identity of the victims. Some cases involved multiple grounds for discrimination, committed against LGBT people who are also sex workers, or PLH.

“The work that has been carried out helped to draw the conclusion that documenting cases of discrimination on the basis of SOGI is an effective way to get a real picture about the denial of medical services, the disclosure of personal data, the use of hate speech, and about the commission of hate crimes in countries,” – stated Yuri Yoursky, Human Rights and Legal Issues Coordinator at ECOM.

“Unfortunately, rights violators are both ordinary citizens, as well as medical workers, police, and government officials, including ministers and prime ministers. In all five countries, there is a high level of stigma towards gay men, MSM, and trans people, which leads to mental disorders and self-stigmatization among representatives of the LGBT community, which is why these people must hide their medical and psychological problems,” noted Yuri. “A high level of homophobia and transphobia has been observed among government officials, medical workers, and police officers. Government representatives often use their official power to prevent LGBT people from mobilizing and standing up for their rights. There are significant gaps in antidiscrimination legislation and laws on gender expression. Specific medical services for gay men, other MSM, and trans people are either unavailable or incomplete. These problems are partly due to general problems with national healthcare systems. However, the healthcare problems related to these communities are largely due to the hostile attitudes of state officials and medical workers.”

Cases were collected by the following organizations: in Armenia, Humanitarian NGO “New Generation”; in Belarus, individual activists and consultants; in Georgia, NGO “Equality Movement”; in Kyrgyzstan, Public Organization “Kyrgyz Indigo”; and in North Macedonia, by three organizations, the Association of People Living with HIV “Stronger Together”, NGO “EGAL”, and the First Association of Sex Workers in the Balkans “STAR-STAR”.

This report can be accessed in ECOM’s library.