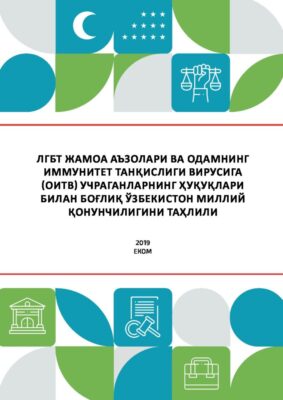 ECOM continues its analysis of national legislation related to the rights of LGBT people and HIV in the countries of Eastern Europe and Central Asia.

In 2020, the main focus was on analyzing the legislation of Kazakhstan, Kyrgyzstan and Tajikistan. In addition, the 2019 studies on Azerbaijan, Turkmenistan, and Uzbekistan were translated into national languages.

Today, we are pleased to present the analysis of national legislation in the Republic of Uzbekistan.

The analysis contains information about barriers that prevent people living with HIV, gay and other men who have sex with men, as well as trans* people, from realizing their rights in various areas of life.

When analyzing legal practices, judicial practice and government statistics were taken into account, as well as reports of activists, information and statistics from organizations involved in documenting and protecting from human rights violations, press reports, and the reports of non-governmental organizations to international legal bodies.

Both legislation and law enforcement practices were analyzed to determine their compliance with international and European standards. The recommendations received by Uzbekistan as part of international monitoring mechanisms, and their implementation by the country’s government, were also analyzed.