ECOM: Georgia has taken important steps to protect the rights of LGBT, but HIV legislation has to be improved 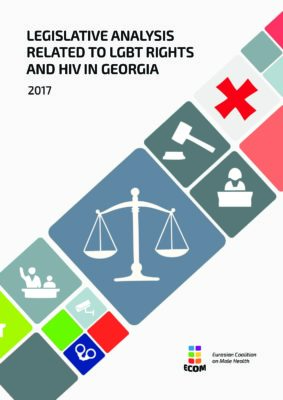 Georgia has adopted the Law on elimination of all forms of discrimination that includes sexual orientation and gender identity among protected grounds, and also made corresponding amendments to other key norms that regulate different areas of public life.  In the same time, in terms of HIV, country has stigmatizing “Law on HIV/AIDS” in Georgia, according to which HIV-positive person is obliged to inform the sexual partner and/or spouse about his/her HIV-status.

«Legislative analysis related to LGBT Rights and HIV in Georgia» highlighted as positive changes, that state has adopted the Law on elimination of all forms of discrimination and also made corresponding amendments to other key norms that regulate different areas of public life. All the amendments provide prohibition of discrimination on the grounds of sex and health status according to General Comments of the Committee on Economic, Social and Cultural Rights and UNAIDS policy guidance.

The Criminal Code of Georgia also considers motives, based on sex, sexual orientation and gender identity as aggravating circumstance for all relevant crimes, provided for by the Criminal Code. This rule corresponds to requirements, outlined in the recommendations of the Council of Europe Committee of Ministers and Jogjakarta principles.

A major step forward on the way of combating discrimination of gay men, other MSM is lifting blood donation ban for men who have sex with other men and planned amendments to the order of the Ministry of Health to reflect this.

However, despite of anti-discrimination legislation and strengthened criminal responsibility for hate crimes, such violations do not lead to proper investigation, this situation can be effectively changed by establishing effective investigation procedure controls. Georgian authorities should also focus on training law enforcement officers and judges on specific aspects of such investigations and judicial inquiry in order to improve situation in this area.

Other legal barriers for gay men, other MSM and trans people also prevent them from fulfilling their rights. Georgia should provide access to gender reassignment procedures for trans people. There are neither a mechanisms of gender reassignment, provided by the national legislation, nor sufficient health services in medical institutions. Being unable to access gender reassignment procedures, trans people cannot enjoy their rights. The European Court of Human Rights in its practice pointed out, that States must provide transgender persons a possibility to undergo surgery, leading to full legal gender recognition, and that surgery expenses should be covered by insurance plans as “medically necessary” treatment.

Would also be an effective step for Georgia legalization of same-sex marriage or partnership, which corresponds to PACE Resolution 1547 (2007). This would help gay men, other MSM and trans people combat discrimination, based on sexual orientation, and enjoy partnership rights, which include «some basic needs which are fundamental to the regulation of a relationship between a couple in a stable and committed relationship, such as, inter alia, the mutual rights and obligations they have towards each other, including moral and material support, maintenance obligations and inheritance rights». Such amendments would give same-sex couples an opportunity to adopt children, according to Article 8 of European Convention and Principle 24 of The Yogyakarta Principles that enshrine the right to find a family.

Among the recommendations given in the analysis: