ECOM: Homophobia and transphobia among law enforcements prevents the protection of LGBT rights in Belarus 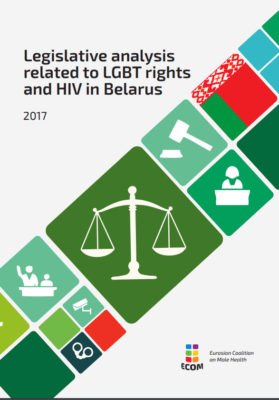 Eurasian Coalition on Male Health (ЕCОМ) conducted legislative analysis related to LBGT rights and HIV in Republic of Belarus in 2017.

Analysis demonstrated compliance of the Belarusian laws with the international requirements in terms of the freedom of movement for people living with HIV – there is no prohibition for the entry of PLWH and no requirement of mandatory HIV testing, with ART being offered to people who have residence permits.

The possibility of gender reassignment is also an indicator of compliance with the rights of trans* people in line with the requirements of the Recommendation CM/Rec(2010)5 of the Committee of Ministers of the Council of Europe, but there is a big gap in terms of compliance with the right to privacy and the right to private life, which requires introducing amendments to the procedure of legal gender recognition and all the relevant changes in documents.

Unfortunately, in the laws and in the legal practice of the Republic of Belarus there are numerous gaps, leading to the violations of the rights of PLWH, gay men, other MSM and trans*people in other areas of life – rights to the freedom of expression, peaceful assembly and association. This also relates to the matters of private and family life of LGBT, including not only the matters of partnership and/or marriage, but also adoption and/or child care.

Another critical issue is registration and effective investigation of the hate crimes against LGBT.  Currently, relevant barriers include not only legislation issues, but also reluctance of the law enforcement bodies to accept complaints from the members of LGBT community, investigate such crimes and take them to courts. A separate barrier worth mentioning is homophobia of the law enforcement bodies towards the victims of such crimes, which prevents many victims from filing complaints with law enforcers.

As noted in the analysis, to avoid violations of the right to the freedom of association, the procedure of NGO registration should be made clear and transparent, the practice of refusal to register such organizations due to formal reasons should be eliminated and a mechanism should be created to challenge such refusals, as well as Article 193-1 stipulating responsibility for unlawful organization of a civil society association, a faith-based organization or a foundation or participation in the activities of such entities should be withdrawn from the Criminal Code of Belarus.

To enforce the freedom of expression and peaceful assembly, it is important to simplify the procedure of conducting rallies and demonstrations in Belarus, – noted in the analysis.

One of the most urgent issues for Belarus remains effective and careful investigation of all reports of SOGI-based crimes and relevant punishments should be ensured. Provisions prohibiting hate crimes are to be introduced to the legislation, together with an aggravating circumstance – committing an offense due to the reason of intolerance to a wide range of characteristics, including SOGI. Anti-discrimination laws, in particular protecting people from SOGI-based discrimination, are to be developed and adopted.

“Analyses conducted in Belarus only partially describes the situation on LGBT and PLWH rights in the country. However, even out of this data it is clear that the situation is complex and requires urgent measures to improve it, and firstly, measures from the authorities. At the same time, civil society should not stop at what has been achieved, and it is necessary to unite its efforts to protect rights and freedoms in Belarus” – said ECOM Human Rights and Legal Issues Officer, Yuri Yoursky.