ECOM: Macedonia has made significant progress in protecting the rights of LGBT 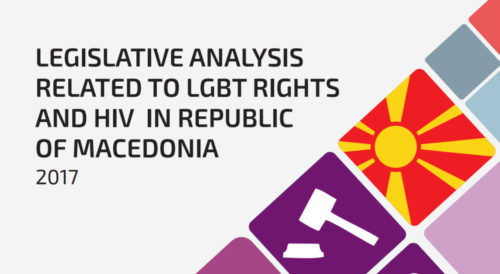 The Republic of Macedonia has made significant progress in protecting the rights of the LGBT and removing legal barriers for people living with HIV. There are no restrictions on the migration of people living with HIV, and there is no ban on blood donation for MSM. However, there are issues in the country leading to violation of the rights of PLWH, gay men, other MSM and trans people, that require solutions.

Eurasian Coalition on Male Health (ЕCОМ in 2017) conducted legislative analysis related to LGBT rights and HIV in Macedonia, which demonstrated the compliance of a number of important aspects of national legislation with the requirements and obligations of international and European human rights norms.

According to analysis, there are no any legal barriers to migration to the Republic of Macedonia for people living with HIV. Legislation does not impose on MSM restrictions in blood donation. Liability for HIV transmission is not explicitly differentiated in the Criminal Code, and included in liability for infection diseases transmission. Macedonian legislation also provides criminal liability for spreading material, promoting or stimulating hatred, discrimination or violence, based on sex, and violation of basic human rights and freedoms acknowledged by the international community and based on difference in sex, which is very significant step towards LGBT rights protection.

However, many gaps in the legislation and absence of proper regulations still lead to violation of PLWH, gay men, other MSM and trans people’s rights. Explicit prohibition of discrimination on the basis of sexual orientation is only provided in the “Law on Labor Relations” and the “Law on Health Protection”, but not in the “Law on Preventing and Protection against Discrimination”, as the principal legal act that treats the subject of discrimination. Gender identity is not recognized as a possible basis for discrimination in any law. Keeping in mind prevalence in the Republic of Macedonia of stereotypes and prejudice against lesbian, gay, bisexual, trans and intersex persons, it is very important to have explicit legislative rules that prohibit any form of discrimination on the grounds of sexual orientation and/or gender identity.

Legal practice also does not provide proper law enforcement in this sphere. Despite of criminal liability for offences against basic human rights based on the difference in sex, provided by the law, most of such cases were not properly investigated.  This contradicts with 29th principle of the Yogyakarta Principles about appropriate, accessible and effective criminal, civil, administrative and other procedures and monitoring mechanisms to ensure the accountability of perpetrators for human rights violations, related to sexual orientation or gender identity as well as prompt and thorough investigation of violation cases. The situation can be effectively changed by establishing investigation procedures controls and teaching enforcement agencies to prevent and investigate offences in this field.

As highlighted in the analysis, lack of access to legal gender recognition also has to be addressed. Being unable to access medical gender reassignment procedures, trans people cannot enjoy their right of private life, provided by Article 8 of European Convention. The European Court of Human Rights in its practice pointed out, that States must provide transgender persons a possibility to undergo surgery, which leading to full legal gender recognition, and that surgery expenses should be covered by insurance plans as “medically necessary” treatment.

According to ECOM, it would be also progressive for the Republic of Macedonia to make some steps towards same-sex marriage or partnership legalization, which corresponds to PACE Resolution 1547 (2007). This would help gay men, other MSM and trans people combat discrimination, based on sexual orientation and gender identity, and enjoy partnership rights, which include «some basic needs which are fundamental to the regulation of a relationship between a couple in a stable and committed relationship, such as, inter alia, the mutual rights and obligations they have towards each other, including moral and material support, maintenance obligations and inheritance rights».

Such amendments should give same-sex couples an opportunity to adopt children, according to the Article 8 of the European Convention and the Principle 24 of the Yogyakarta Principles that enshrine the right to find a family.

ECOM has prepared recommendations that may help to strengthen actions aimed to protect the rights and freedoms of gay men, other MSM and trans people in Macedonia.