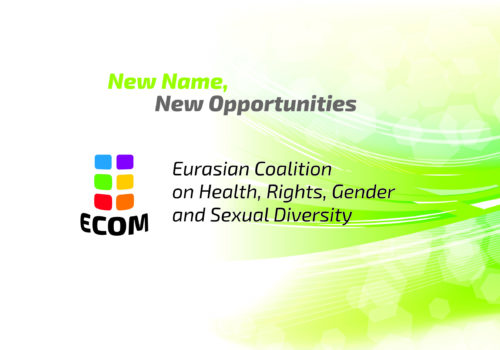 “ECOM – Eurasian Coalition on Health, Rights, Gender and Sexual Diversity.” This will be the full name of the Coalition in 2020

Since its establishment in 2011, ECOM defined its mission as uniting partners in Eastern Europe and Central Asia to create a favorable environment in which all gay and bisexual men and other MSM, and all trans* people have access to evidence-based human rights oriented health services, including in HIV.

Our mission consistently pointed out that the Coalition represents two populations – gay and bisexual men and other MSM, on one hand, and trans* people, on the other.

“For ECOM and trans* community representatives within the Coalition, the term “trans* people” includes all diverse groups within the community – trans* men, trans* women, non-binary people – and takes into account all variations in sexual orientation. We needed to clearly reflect the diversity of communities represented in ECOM,” said Vitaly Djuma, Executive Director of the Coalition. “In addition, we at ECOM significantly accelerated our work on protection of the right to health and combatting stigma and discrimination. This is why the ECOM members decided that not only the mission, but also the name should more accurately position the Coalition in terms of representing the communities and stating the focus of our work on health and rights.”

Abbreviation is the same: ECOM