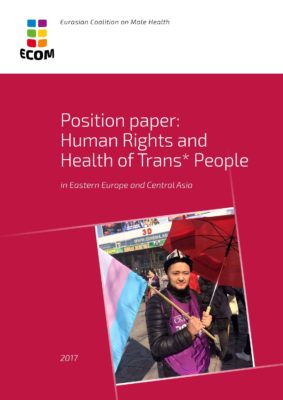 in Eastern Europe and Central Asia

On the International Day of Transgender Visibility 2017, the Eurasian Coalition on Male Health (ECOM) declares its position on human rights and health of trans*[1] people.

We stand beside trans* people around the world and especially in Eastern Europe and Central Asia. Trans * people are inseparable part of us and we work together to achieve our mission.

We recognize the diversity of trans* people and gender identities or a preference for not having any identity, and we respect the right of everyone to self-determination of gender and sexuality.

We recognize that trans* people are an especially vulnerable group, subject to stigmatization, discrimination and human rights violations, particularly related to their access to health services.

Trans* people from Eastern Europe and Central Asia still remain invisible to the general public and to health programs in our region.

We recognize the grave problem of legislative gaps impeding the legal recognition and implementation of human rights, which includes, but is not limited to the following issues:

We recognize the particular vulnerability of trans* people to HIV and the following factors that contribute to this vulnerability:

We emphasize program gaps in health care, including HIV-related services:

We recognize other rarely addressed challenges that trans* people face:

We recognize the high vulnerability of trans* people living in such special conditions as:

Taking into account these key challenges, the Eurasian Coalition on Male Health (ECOM) reaffirms its commitment to promote:

[1] In this document, the term trans* is used to describe transgender people, nonbinary and gender nonconforming people, including (but not limited to) transgender, transsexual, gender queer, bi-gender, agender, etc. This corresponds to the terminology adopted by GATE, Global Action for Trans * Equality (www.transactivists.org).