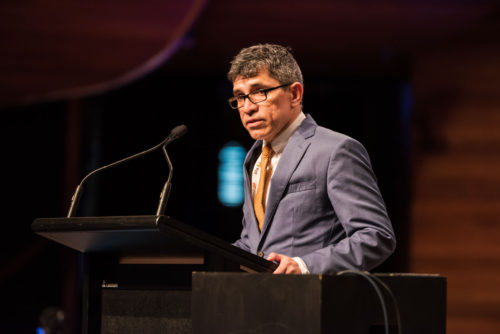 Independent Expert on protection against violence and discrimination based on sexual orientation and gender identity, Victor Madrigal-Borloz presented to the General Assembly the report, submitted in accordance with Human Rights Council resolution 41/18.

The Independent Expert examines how discriminatory laws and sociocultural norms continue to marginalize and exclude lesbian, gay, bisexual, trans and gender-diverse persons from education, health care, housing, employment and occupation, and other sectors. He then discusses the ways in which an inclusive society and effective State measures enable people to enjoy protection from violence and discrimination and highlights the unique role of leaders in different fields, all of which will allow the cycle of exclusion to be broken and have a positive impact on the misconceptions, fears and prejudices that fuel violence and discrimination.

The report contains an important separate block on Health of LGBTQI community, which hilgihg HIV-related issues:

19. Several studies have shown health disparities in the LGBT population. Research shows higher rates of breast and cervical cancer and HIV infection and of mental health concerns, such as anxiety, depression, self-harm and suicide. The criminalization and pathologization of LGBT people have had a deep impact on public policy, legislation and jurisprudence, penetrating all realms of State action in all regions of the world and permeating the collective conscience, and have created barriers which render health services unavailable, inaccessible or unacceptable. The negative health impact of laws criminalizing homosexuality has been widely acknowledged, particularly in efforts to prevent the spread of HIV. It can deter some of those most at risk of infection from coming forward for testing and treatment out of fear of being deemed a criminal. The African Commission on Human and Peoples’ Rights has pointed out that punitive legal environments, combined with stigma, discrimination and high levels of violence, placed gay men and other men who have sex with men at high risk of HIV infection because they were driven underground out of fear of prosecution and other negative consequences.

21. Homosexuality was removed from the International Classification of Diseases in 1990 and trans identities from the chapter on mental disorders in May 2019. Despite this, some countries continue to classify homosexuality as an illness and in almost all countries trans persons are treated as if they were by definition sick or disordered. Earlier in 2019, the Independent Expert and the Special Rapporteur on the right to health called on States to review their medical classifications and adopt strong proactive measures, including education and sensitization campaigns, to eliminate the social stigma associated with gender diversity.

22. Evidence shows that acquiring physical sex characteristics congruent with experienced gender identity generally improves health, well-being and quality of life. Conversely, not being able to live according to one’s self-identified gender is likely to be a source of distress, exacerbating other forms of ill health. However, treatment is difficult to access, and even where available it is often prohibitively expensive. Even in environments that generally have adequate resources, the asymmetries in the situation of trans persons is painfully obvious. In the absence of public health provisions, trans people are forced into unsafe alternative measures to change their bodies to match their gender identity. In many countries, this includes the unregulated use of hormones and the dangerous practice of injecting silicone or industrial oil by non-medical providers.

23. The treatment of same-sex attraction and trans identities as pathologies that can be “cured” contributes to the practice of involuntary institutionalization and forced treatments, such as so-called conversion therapies – often imposed on people without their consent and in some instances found to constitute torture – leading to successful legal challenges and bans in several countries. Such practices are deeply harmful and may cause severe pain and suffering and lead to depression, anxiety and suicidal ideation.

24. Discrimination by health workers is widespread and can manifest in refusals to make medical appointments or treat LGBT people, providing treatment with gross disrespect or violations of medical privacy. A recent survey in the United Kingdom of Great Britain and Northern Ireland shows that two in five trans respondents had a negative experience when accessing health services. Discriminatory attitudes of health-care providers can deter individuals from seeking services and can make LGBT people reluctant to share personal and medical information, jeopardizing their overall health and access to health services: in Argentina, 5 in 10 trans persons surveyed had reportedly stopped attending their health centres because they felt discriminated against.

25. Very few medical education curricula, health standards and professional training programmes have incorporated a comprehensive approach to LGBT health care. Health-care providers may therefore have an inadequate understanding of specific health needs and hold inappropriate assumptions about the causes of health conditions faced by people of diverse sexualities and genders.

26. Lack of legal recognition of relationships restricts the inclusion of significant individuals in family treatment or decision-making roles. The Committee on Economic, Social and Cultural Rights has called on States to ensure that individuals in same-sex unions are entitled to equal enjoyment of their economic, social and cultural rights, which includes the consultation and inclusion of same-sex partners in health-related decision-making or recognition by health insurance companies.

101. Particular measures will need to be adopted in all sectors of State service, including – but not limited – to education, health, employment and social security. Among them:

(a) A review of policies implemented in all sectors, including medical classifications, school curricula and sector protocol and procedures, so as to ensure that they adequately reflect the principles of equality and nondiscrimination and that they are inclusive of LGBT people;

(b) Measures of sensitization and the training of State agents and service personnel, including health providers, social workers, teachers, justice sector officers and administrative officers in all sectors, among others;

(c) The provision of institutions with the guidance and the means to send to their staff and their users the unequivocal message that persons of diverse sexualities and genders are welcome, while abusive behaviours are not;

(d) A system ensuring proper investigation and sanctions of instances of exclusion, harassment and particular phenomena such as bullying;

(e) A review and, as relevant, an update of gender-based policies on the use of public space, and of policies guiding access to segregated spaces such as sanitation facilities and locker rooms.

Full report can be found at https://undocs.org/A/74/181?fbclid=IwAR3uVfgFEN2mqphccxMhadhmKkIRxopyKDsE9C4uT1zTF1sRrzAuAA3vZe8