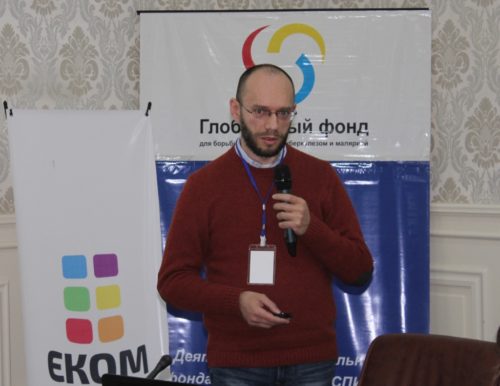 In addition to ECOM’s involvement in advocacy activities with the Global Fund, representatives of ECOM have attended a number of conference and meetings during 2015 devoted to different issues related to HIV, human rights, and other issues affecting the region of Eastern Europe and Central Asia (EECA). Gennady Roshchupkin at the 4th National Conference of MSM Services and LGBT Communities of the Kyrgyz Republic. Credit: ECOM.

May 17, 2015 marked the International Day against Homophobia, Transphobia, & Biphobia (IDAHOT), as well as the International AIDS Candlelight Memorial In order to commemorate the two events, ECOM released a statement emphasizing the link between homo- and transphobia and the growing HIV epidemic among MSM and trans* people in EECA. ECOM called upon national governments in the region to prevent discrimination and violence and protect the human rights of all citizens, including LGBT people and also encouraged LGBT communities to demand the fulfillment of their human rights and civil liberties.

In conjunction with World AIDS Day 2015 (December 1, 2015), ECOM released a position statement highlighting the need for high-quality, strategic information in order to accelerate the eradication of AIDS among MSM and trans* people in EECA countries. In the statement, ECOM pledged to work with communities, medical and academic institutions, government agencies, and with international structures in order to collect strategic information, decrease stigma and discrimination, increase funding of HIV programs targeting MSM and trans* people, and provide the necessary technical support to communities and countries.

In addition to these two position statements, ECOM has released advocacy statements condemning human rights abuses and homo- and transphobic legislative initiatives in countries such as Kyrgyzstan and Kazakhstan. It has also issued statements on important developments in the region, including the Ukrainian Parliament’s decision to pass anti-discrimination protections for sexual minorities.

In May, Gennady Roshchupkin attended a meeting hosted by the East Europe & Central Asia Union of PLWH (ECUO), “Strengthening Coordination and Advocacy of Regional Unions of Networks of Key Populations to Achieve “90-90-90” in Eastern Europe and Central Asia” in Yerevan, Armenia. The meeting focused on scaling up access to HIV testing and counseling in Eastern Europe and Central Asia. There, Roshchupkin gave a presentation on voluntary counseling and testing (VCT) among MSM. In addition, Roshchupkin was invited to give a presentation on VCT at a subsequent meeting devoted to the topic in Barcelona, Spain in October. In June, Riga, Latvia hosted Euro Pride 2015. Latsin Alijev, a board member of ECOM, traveled to Riga in order to take part in the pride events on behalf of ECOM. Alijev participated in a number of working groups on health and human rights, distributed informational material about ECOM, met with other LGBT organizations, and marched in the pride parade. Later that month, Executive Director, Vitaly Djuma traveled to Copenhagen, Denmark to participate in the regional consultation, WHO Global Health Sector Strategies on HIV and Viral Hepatitis: Towards Universal Health Coverage, 2016-2021.

Kiromiddin Gulov, an ECOM member from Tajikistan, represented ECOM at the UNFPA Consultation on Young People from Key Populations in November. The consultation took place in Tbilisi, Georgia and brought together participants representing governments, NGOs, and young people from eight EECA countries to discuss findings from focus group discussions, and to identify commonalities and the way forward to ensure young key populations exercise their rights to sexual and reproductive health and HIV services.

In December, Executive Director, Vitaly Djuma, was invited to speak at the Funders Concerned About AIDS Meeting in Washington, DC. Djuma engaged private donors to increase support for human rights interventions and to consider investing in the safety of both clients and staff of LGBT organizations. He also encouraged participants to lobby the US Congress in order to change its current approach to global HIV funding, which ignores middle-income countries.

The 4th National Conference of MSM Services and LGBT Communities of the Kyrgyz Republic was also held in December and attracted more than 30 participants, representing civil society organizations, healthcare workers and public officials. Communication Officer, Ivan Lavrentjev, participated in the conference, held in Bishkek, Kyrgyzstan. The conference was aimed at facilitating an exchange of experiences between participants and ensuring a better understanding of the challenges, faced by the LGBT community in Kyrgyzstan due to the volatile legal and social environment and a decrease in funding opportunities for HIV-related services. A joint declaration formulated at the conference emphasized the need for further cooperation between civil society organizations, other NGOs, and public authorities.