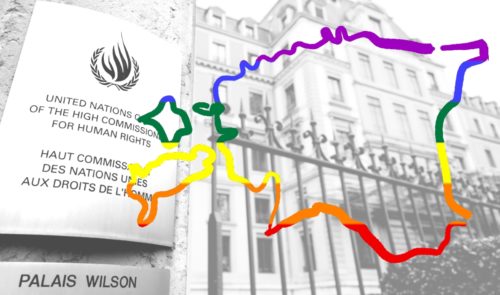 The United Nations Human Rights Committee is a UN body of independent experts that monitors implementation of the International Covenant on Civil and Political Rights by its 172 State parties.

Estonia went under its fourth periodic review at UN Human Rights Committee within the 125th session on 4-29 March 2019.

As we informed earlier, ECOM submitted an alternative report on discrimination against LGBTQ community in Estonia, in particular HIV-related issues among MSM. ECOM’s Human Rights and Legal Issues Officer presented the report at the session and advocated for gender identity to be considered as a ground for protection from discrimination and to be included in the 151 and 152 articles of Criminal Code of Estonia.

In its concluding observations, Committee made important remarks related to SOGI:

While noting that data on hate crimes has been collected since autumn 2016 and that IT support was introduced to better categorize incidents motivated by hatred while registering criminal complaints, the Committee regrets the lack of specific data on the number of complaints regarding hate speech and hate crimes, including on the basis of sexual orientation and gender identity, and on their effective investigation and prosecution (arts. 2, 19, 20 and 26). 14.

The State party should ensure effective protection against hate speech and hate crimes, both in law and in practice, in accordance with articles 19 and 20 of the Covenant and the Committee’s general comment No. 34 (2011) on freedoms of opinion and expression, including by:

(a) Revising the penalties and the threshold for the offence of incitement to hatred, violence or discrimination under article 151 of the Criminal Code;

(b) Including gender identity among the prohibited grounds for hatredmotivated offences provided for in articles 151 and 152 of the Criminal Code;

(c) Recognising hate motives, including on the basis of sexual orientation and gender identity, as aggravating circumstances for all offences;