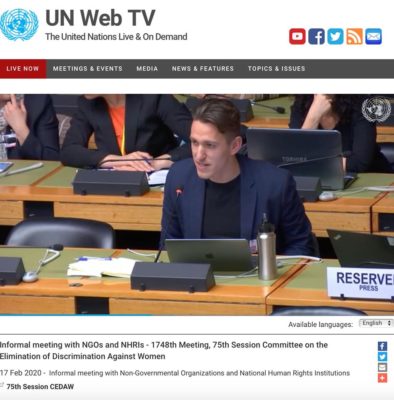 In February 2020 the Republic of Moldova was under it’s sixth periodic review by Committee on the Elimination of Discrimination against Women (CEDAW). For the session, ECOM in partnership with NGO “GENDERDOC-M”, the only organization that is offering legal and psychological assistance for trans* people with legal gender recognition and discrimination based on gender identity and gender expression in Moldova, submitted a joint alternative report on rights violations of trans* women in the Republic of Moldova.

During the dialogue between CEDAW members and NGO delegation, in Geneva, Yuri Yoursky, ECOM human rights and legal issues coordinator, presented the report and made an oral statement on the topic of exclusion of trans* women from the national health programs. “Trans* women conclude a minority group that is more vulnerable to increased health risks, HIV in particular. But in national HIV-programs trans* women are not included as a separate group. Trans* people are victims of intersectional stigma and face abuse or even denied healthcare services in Moldova” – Yoursky said.

As a result, on March 2, CEDAW issued its conducing observation for the Republic of Moldova, which due to efficient advocacy includes the following:

(b)        Raise awareness among women, including those belonging to ethnic minority groups, women with disabilities, migrant women, older women and lesbian, bisexual and transgender women, about their rights and the legal remedies available to them to claim those rights;

(f)         Eliminate discrimination and stigma against women living with HIV/AIDS through awareness raising and extend the programme on Prevention and control of HIV/AIDS to women belonging to disadvantaged groups, particularly transgender women.

ECOM and GENDERDOC-M will continue its work to improve a framework for non-discriminatory procedures of gender reassignment, in particular changing the trans* person’s legal name and gender without obligatory surgeries in Moldova.  ECOM is ready to support the government of Republic of Moldova to adapt its healthcare policies and programs in the area of HIV to suit the needs of the trans* people.