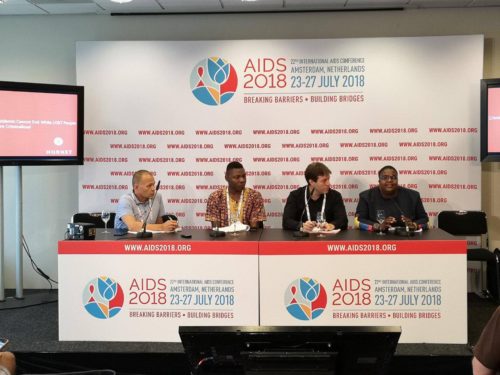 The participants of the AIDS 2018 conference, which is being held in Amsterdam, have discussed the issues of criminalization of LGBT people and its impact on the HIV epidemic globally.

The Executive Director of M-Pact (formerly known as the Global Forum on MSM and HIV (MSMGF)), George Ayala, has shared the information about the organisation’s efforts to advocate and fight for gays, MSM, and LGBT people to enjoy their right to health.

M-Pact is ECOM’s paramount partner and it also upholds the coalition’s activity in the countries of Eastern Europe and Central Asia. In particular, M-Pact supports the legislative recognition of same-sex partnerships in Estonia, the adoption of anti-discriminatory legislation in Georgia and the passage of a law that will allow trans people to officially change their documentary names in Armenia. George Ayala has emphasized the importance of financing in advocacy, as well as the priority of acting not only on state-levels but of combining the efforts of diverse countries and organisations in the region also.

As per UN data, currently, not less than 76 countries around the globe have laws that criminalize voluntary same-sex sexual relationships. In the EECA region, such states happen to be Uzbekistan and Tadzhikistan. Many countries still exercise the so-called “conversion therapy” on LGBT people: they are forcefully sterilized and subjected to other involuntary medical procedures. The mentioned not only directly violates human rights but also acts as a significant obstacle for the resolution of the HIV/AIDS issue in the world. As a result of stigma, discrimination, and legislative persecution, LGBT people face an obstructed access to prophylaxis, testing, consultation, treatment and other services related to HIV.