We are pleased and proud to present another project led by ECOM in cooperation with national partners in Eastern Europe and Central Asia, and with the support of the Elton John AIDS Foundation.

The project is designed and developed taking into account evidence-based challenges, including the widespread invisibility and neglect of trans* people in the HIV response in the EECA region, the limited trans*-specific prevention projects, the lack of strategic information, the low level of awareness about HIV among trans* communities, widespread transphobia and discrimination, and the use of a pathologizing approach at the state level.

As the project impact, we envisage that trans* people will empower themselves and benefit from comprehensive, trans*-competent services, when HIV response measures meet the needs of trans* people with the support of sensitized decision-makers and trained experts.

I am delighted to be involved in such an important, health-focused project “by trans* people for trans* people”.  The fact that this project is aimed at a closed part of society, people whose worldview does not fit into the framework of a binary system and/or whose gender identity differs from that assigned at birth, elicits even more positive emotions. This stigmatized part of society faces discrimination on a daily basis. And in many respects, for these reasons, health issues are far from being the first thing they care about. The fact that this project involves people from the trans* community will increase trust in the project, – says Lera Tatyanina, Project Coordinator at “T9 NSK”, a national partner of the project.

In order to overcome challenges and achieve an impact, ECOM and national partners have developed the following goals and objectives:

Project goal: Expanding and strengthening HIV services for trans* people in EECA through community mobilization and creating an enabling environment.

Including training and support for representatives of trans* communities in HIV coordinating bodies, development of a unique model package of comprehensive, trans*-competent services, advocacy for the inclusion of trans* people in national HIV strategies.

In Russia, dialogue has now begun on the inclusion of trans* people in HIV programs at the national level. This project will provide an opportunity to strengthen the capacity of trans* organizations to combat HIV infection, to fully participate in decision-making on the development of a package of trans*-oriented HIV-services, and will also provide the trans* community, not only in Russia, but in the entire EECA region, with tools for further work, – says Anton Macintosh, member of the Working Group of Trans* People at ECOM, Coordinator of the trans* initiative group, “T-Action”, a national partner of the project.

As a result, participants and partners of the project will develop a number of new policy documents, develop population size estimations, formulate national packages of comprehensive HIV services for trans* people, and ensure that trans* people are recognized as a key population in national responses. In a broader context, we will ensure a new level of visibility and awareness, influence the mobilization and self-empowerment of trans* communities, and lay the foundations for the institutionalization of competent and trans*-specific services.

You can obtain detailed information about the “Trans* Map in EECA” project in our informational project brochure.

The geography of the project covers five countries, although the results of the project will have an impact on the entire region: Armenia, Georgia, Kyrgyzstan, Russia, and Ukraine.

We are pleased to introduce our national partners: 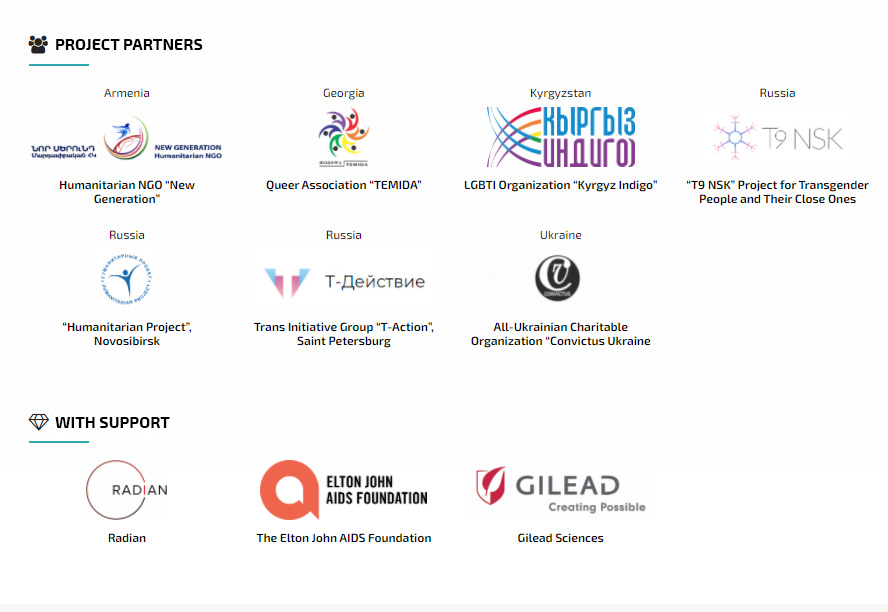 * When we say trans* people, we are speaking about people with an unlimited number of gender identities that are partially, completely, temporarily or permanently different from their sex assigned at birth. More information can be found here: https://ecom.ngo/wp-content/uploads/2020/01/glossary-trans-people.pdf