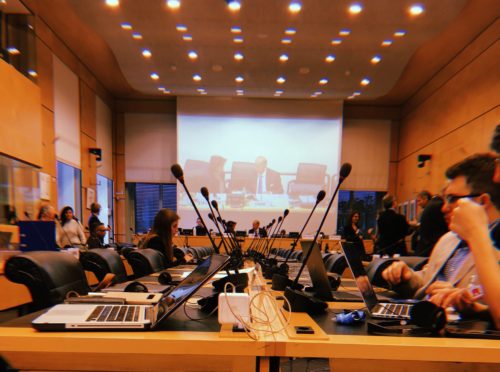 On 4-5 March the Republic of Estonia is under review of UN Human Rights Committee for the 4th time.

Here is the summary of all SOGI-related references during 2-days dialogue between the Committee members and the Estonian Delegation.

Ms. Kaisa Knight from Equality Policies Department in Ministry of Social Affairs, announces that they have applied for the EU commission funding to conduct a comprehensive research to collect the data on LGBTQI needs in Estonia, to integrate the findings in the Equal Treatment Act.

During the second round of questions, Mr. Andreas Zimmermann, UN Human Rights Committee members from Germany, highlighted, that applying for EU funding not necessary means that sources will be granted to the State, so what would be the actions from the Republic of Estonia? The reply from the official delegation states, that in that case Estonia will cover the funds for this research itself.

Ms. Siiri Aulik, adviser in Public Law Division from the Legislative Policy Department in Estonian Ministry of Justice, assured that they still expect to amend the 151 article of Penal Code with “sexual orientation and gender identity” as aggravated grounds to Hate crimes. It was delayed due to parliamentary elections this spring.

It is important to mention, that State Party Report (para 27) argues that “[t]he Equal Treatment Act entered into force on 1 January 2009 and its purpose is to guarantee people’s protection from discrimination on the grounds of ethnic origin, race, colour, religion or other beliefs, age, disability or sexual orientation.” However, there is no “gender identity”, which negatively affects the trans persons in the Republic of Estonia. Ms. Marcia V.J. Kran, the committee member from Canada, raised this issue during the first round of dialogue between the HRCtee and State party.

Additionally Ms. Kran, had her concerns, how the hate crimes based on sexual orientation and gender identity considered in the court at the moment, and rather any of the court decisions affected the existent legal framework in the Republic of Estonia. No specific answer from the state followed.

One of the main concerns which were brought up during the 4th review related the weak involvement of civil society in the reporting process. Ms. Protini Pazartis, member of HRCtee from Greece, raised the issue, rather civil society face any obstacles in this process, how the government assures that NGOs involve meaningfully in cooperation with government? And Mr. Yuval Shany from Israel mentioned weak participation of LGBT in the program creation in Estonia.

The Head of the Estonian Delegation, Ms. Annely Kolk, assured that during the state report preparation civil society is widely invited to comment and amend the documents. “However, I have to admit that not many NGOs report back to us. Ministry of Internal Affairs widely disseminate the document among civil society, as well as a final conclusion of the UN Treaty Bodies”.

also referred to the Drafting of Strategy of the Health of Population, that NGOs have being widely invited to comment, and around 70 civil society organizations participated. As she assured that no one was left behind on purpose, that just some on the NGOs might have not being reached directly by the Ministry. Still, all the information on policies are available on the official websites of the related Ministries, so it’s NGOs responsibility to participate more actively.

Ms. Ruth Annus, Head of Citizenship and Migration Policy Department from the Ministry of Interior, highlighted the equal right for family to everyone. Estonia has passed the Registered Partnership Act, which provide possibility for same sex couple to register their relationships, but despite this, it cannot serve a ground for a foreign spouse to apply for a resident permit in Estonia, for the couple to reunite. This was already contested, and the appeal is in Estonian Supreme Court.

The marriage in Estonia is defined as a union between men and women, which creates an obstacle for same sex couples to fully enjoy their right to family. Nevertheless, this was also appealed to Supreme Court, and the decision in to come in the few months.

As it has been said previously, ECOM submitted its alternative report on HIV among MSM in Estonia, and presented it in Geneva.