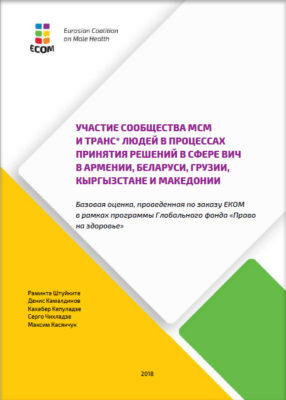 Involvement of communities in the decision-making processes in the field of HIV prevention among key populations remains low in Central, Eastern Europe and Central Asia (CEECA). It is both because of existing structural barriers and lack of resources and understanding of the country dialogue processes within the communities.

Such a conclusion can be made after reviewing the findings of the study “Involvement of the MSM and trans people community in HIV decision-making” conducted by the Eurasian Coalition on Male Health (ECOM) in Armenia, Belarus, Georgia, Kyrgyzstan and Macedonia within the regional program “Right to Health”, with the financial support of the Global Fund.

According to the data received, men who have sex with men (MSM) and transgender (trans) people in the CEECA countries face many barriers and can not properly participate in the country dialogue: discriminatory laws and practices, lack of resources for community-based organizations, and also poor MSM and trans people’s understanding of political processes in their countries.

MSM and trans people, specifically trans women, are key populations (KPs) at high risk of HIV infection. However, quite often these populations have no opportunity to share their experience and participate in national dialogues in CEECA countries. Even if MSM and trans people are members of decision-making entities, the actual level of their impact remains low – from 29% to 53%, depending on the country.

When speaking about the level of community development in the countries under review, one can note that despite the presence of LGBT organizations and initiative groups not all of them are involved in HIV prevention or communicate with the health sector. At the same time, for example, in Belarus, there are no officially registered LGBT organizations because of unspoken political barriers and law enforcement policies that prevent LGBT activists from registering CSOs. In other countries, only one or two organizations deal with the health rights of MSM and trans people and HIV prevention in the community.

In all five countries, national HIV response entities include members of the LGBT community. In many cases, nomination and election of the candidates to the CCM follows an open and transparent procedure. However, the participation of community members in these entities, in general, remains unknown to the communities themselves.

The Eurasian Coalition on Male Health recommends: create and develop mechanisms to increase the community involvement in decision-making processes and improve the accountability of representatives of MSM and trans people who are members of the management bodies to the community, including trans people.